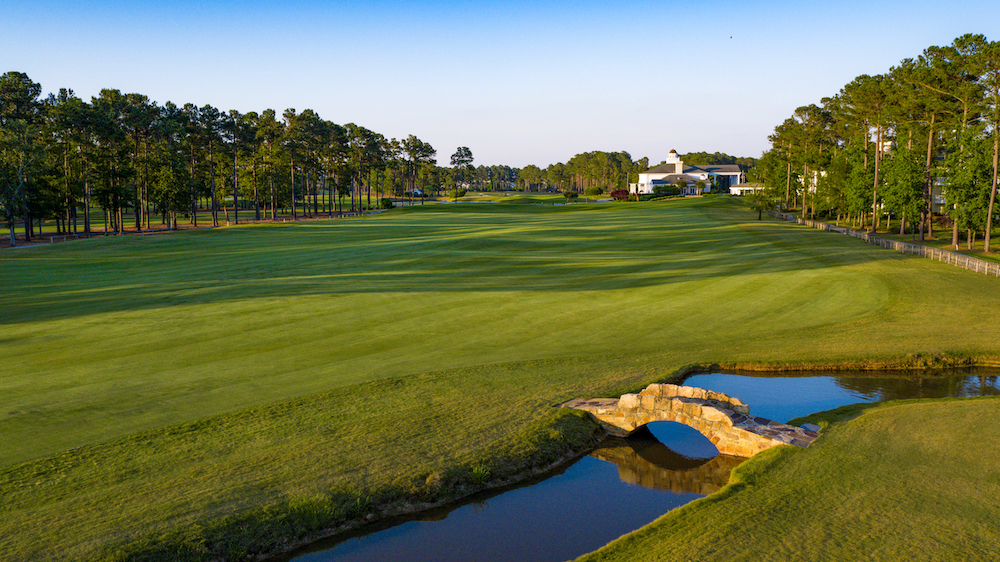 Here’s a riddle for you. How do you travel to nine different states and two countries including Canada and Scotland, all without leaving the city limits of Myrtle Beach? The answer is International World Tour Golf Links.

This par-72 course features replica holes from some of the nation’s top-ranked courses as well as some further from home. With the opportunity to play the same holes as some of the greats, it goes without saying that few experiences exceed the one awaiting you at World Tour Golf Links.

The front nine at World Tour, referred to as the Open Nine, includes spectacular golf holes from courses that have hosted either a U.S. or British Open. One of the highlights of the Open Nine is the par-3 3rd Hole that resembles the 17th Hole at the Stadium Course of TPC Sawgrass. Although the hole may seem easy from the comfort of your own living room when watching players dunk it in the surrounding hazard, you may have a different reaction after stepping up to the tee box for yourself. The final hole on the Open Nine is a tribute to the 18th at St. Andrews. It features a replica of the Swilcan Bridge and the infamous “Valley of Sin” that guards the green.

The back nine at World Tour includes holes synonymous with all four of the men’s major championships. Although each hole is outstanding in its own right, it’s awfully difficult not to be blown away by Myrtle Beach’s very own Amen Corner. A trio of holes on the Championship Nine pay tribute to the 11th, 12th and 13th Holes at Augusta National. The only things missing are the abundant azaleas and Tiger Woods!

After your round, be sure to stop by the Player’s Grille for the club’s delicious Reuben sandwiches or dine outside on the veranda overlooking the final hole of the Championship Nine, inspired by the 11th Hole at Bay Hill.

The design of World Tour seamlessly brings together some of the world’s most outstanding holes. Although each is a replica, the experience of playing a round at World Tour is completely original.